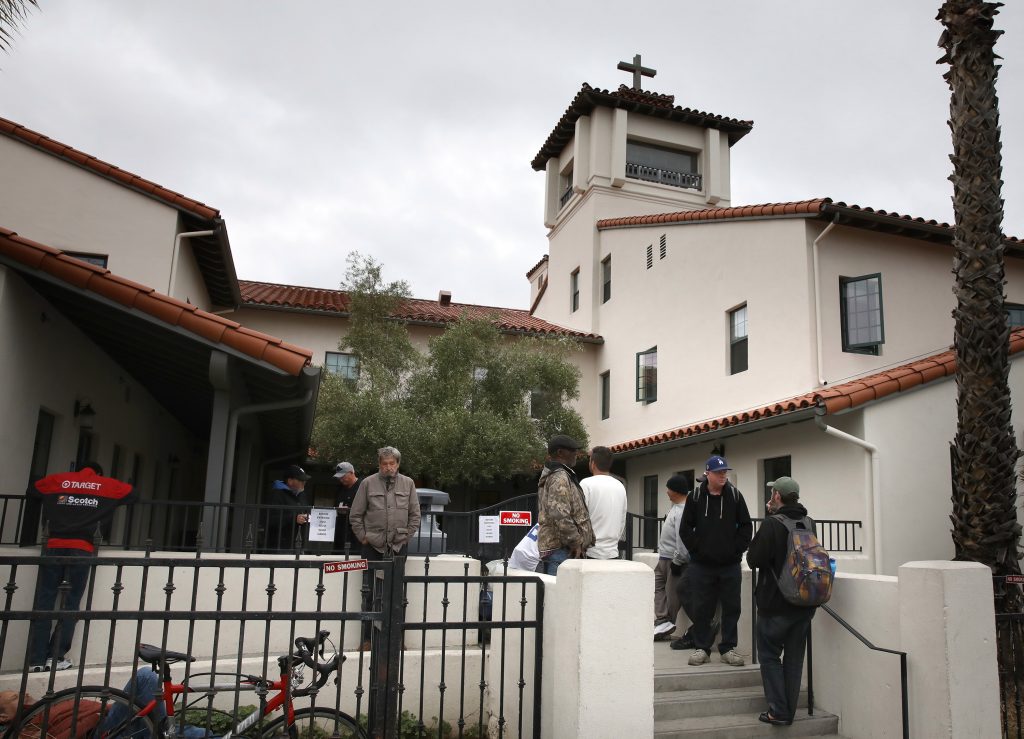 Ken Ralph was finally able to take his show to the Earl Warren Showgrounds this Tuesday, providing showers and food to about 30-50 homeless people who would otherwise go unwashed and unfed.

In the past five years, Ralph — a great believer in the transformative powers of a hot shower, clean underpants, and fresh socks — has provided 25,000 such showers in seven different locations around the county to those down on their luck via his nonprofit, Showers of Blessing.

The March 24 event at the Showgrounds turned out to be only a one-time event, but Ralph is determined to keep his program going. Even though most of his volunteers now have to regretfully stay home, and even though the Bay Area shower program, the largest in the state, had to close down, Ralph is not giving up.

Continuing at the Showgrounds proved impossible because of conflicting government agency requirements. But Ralph is taking extra precautions, even though the operation is down to three employees and one volunteer. After every shower, all shower stalls are cleaned with a strong dose of Lysol by staff dressed in bodysuits designed for house painters as well as masks, goggles, and gloves. All potential clients are screened for fever; no one with a temperature over 100 degrees is allowed.

Ever since Santa Barbara started taking COVID-19 seriously, the need for Ralph’s effluvial ministrations has increased exponentially. All the local gyms that once provided shower facilities to the many Santa Barbarans who live in their vehicles have closed, as have the public library bathrooms where many without shelter used sinks to take “bird baths.” The numbers of those displaced are conjectural, but they easily exceed 300.

Ralph has long argued that people who can clean themselves are more likely to take care of themselves. Throw in clean underpants — bamboo boxers from China and white cotton socks — and they’re further down the road to recovery. That this has become a matter of life and death is now only a slight exaggeration. People without housing are more prone to infections such as the coronavirus. They are also more likely to spread it.

How can people without shelter follow Governor Gavin Newsom’s order to shelter in place? A recent Santa Barbara report shows that the number of homeless people living on the streets and in their vehicles has grown by 150 since last year — and the number who reported being chronically homeless increased 45 percent. These people, many of whom suffer from addiction and mental-health problems, are far more susceptible to infections while living on the streets.

Worse is that the virus arrived with the cold winter rains, creating an urgent demand on the limited shelter space. Social distancing — keeping a six-foot distance between individuals — has not been possible in most shelters. Though many maintain the traditional three-foot separation between cots, they now arrange it so one person’s head lines up against the next person’s feet. This is as close as shelters can get to a six-foot degree of separation.

“The shelter-in-place model is going to really reduce our capacity,” said Rolf Geyling of the Santa Barbara Rescue Mission, which runs a 200-bed facility. About 120 individuals use the overnight shelter, but 70 are enrolled in its drug and alcohol recovery programs which, according to Geyling, are tough to run when people can’t meet.

To date, at least one homeless person has reportedly received the COVID-19 test. He was temporarily quarantined in a private motel and was reportedly found to have tested negative. Had he tested positive, health authorities would have continued the quarantine. County public health authorities will not confirm or refute such reports, citing confidentiality requirements.

During the crisis, Governor Newsom empowered county governments to impound hotel and motel rooms. Kimberlee Albers, of the county’s Housing and Community Development Division, said the county is negotiating to secure a “block” of motel rooms but declined to say how many rooms or motels were involved, though she did say that some hotel owners had approached the county.

A handful of medical beds have long been set aside at the PATH shelter on Santa Barbara’s Eastside, but it doesn’t have the space necessary to isolate a guest who has tested positive for COVID-19 or is presenting such symptoms. The only way to create that space is at the expense of shelter bed space. United Way and the Santa Barbara Foundation are seeking to help fill the void, but solutions are tough to find.

Santa Barbara County health officials have a task force dealing with these challenges in the time of coronavirus. This past weekend, a new emergency shelter opened in North County on the campus of Santa Maria High School. Others are proposed for Lompoc and Santa Barbara, but the details remain sketchy. Shelter operators say it’s obvious that isolation facilities are needed for homeless people displaying symptoms to stop contaminating other shelter residents.

Complicating matters, the Freedom Warming centers — pop-up emergency shelters that open in bad weather — have shut down at the recommendation of county health officials because they couldn’t meet the social isolation requirements.

In the meantime, health officials have contracted with MarBorg to install 20 chest-high, concert-grade handwashing stations throughout the county so that homeless people can follow the same handwashing regime as everyone else.

About 120 car dwellers are currently enrolled in the Safe Parking program run by New Beginnings, with 100 more on the waiting list. New Beginnings currently provides parking spaces in 24 parking lots scattered throughout the South Coast. Typically, these lots have porta-potties available, but only during the night hours. With the closure of the South Coast’s gyms; the downtown public library where 70 homeless people go each day; and the Virgil Cordano Center, which has had about 30 daily visitors, a lot of people have suddenly found themselves with no place to go or to shower during the day.

Around City Hall, the crisis has again raised the question: Should the city provide porta-potties for those living on the streets, or should city restrooms in parks be kept open at night? The city has told homeless advocates that it would cost City Hall $1,200 a day. And that doesn’t mean, city officials insist, that homeless people will use them. Fecal deposits found between two parked cars in city parking lots have become so common that maintenance workers have given it a name: “Code Brown.” Either way, restrooms in city parks have taken such beating at the hands of some homeless individuals that security guards might well be required.

For Jeff Shaffer, Barbara Andersen, and Rich Sander with S.B. ACT, a faith-based nonprofit working to get homeless people into transitional and permanent housing with the services necessary to keep them there, these are dark times. Shaffer said he had to show up for the last public meals program in Alameda Park on Thursday while wearing gloves and keeping a safe distance. The instantaneous evaporation of resources upon which homeless people have long relied, he said, was dramatic enough. “But the loss of the human connection, the sense of dignity,” he added, was equally damaging.

Shaffer, who has worked on homeless issues for 20 years, reflected, “People on the streets are resilient. They figure things out. They have survival skills.” But things have gotten so grim that he’s changing one of his fundamental practices. “This is the first time I have ever said this, but if you see someone, go ahead and given them money. I’d never say that before. But we’re living in a very different time.”